After the murder of George Floyd in Minneapolis, young artists sought to inspire others and begin conversations about injustices in their city through art. One group of dedicated teens became the Minneapolis Lily Project.

The Minneapolis Lily Project is a group of young artists and activists from high schools all over Minneapolis that aim to inspire change through art, and to amplify the voices of people of color. One of the creators, Cicely Bass, said about the goals of the project, “We talked early on about making something that would inspire people.” The project kicked off in late spring of 2020 and they are working to reach their goals by painting murals with a purpose, and supporting Black-owned businesses and artists in Minneapolis. The murals are vibrant and highly visible, spreading the Lily Project’s message of equity and justice across the city.

The process of starting the project, the outreach and planning that went into it, took time and energy, but it was important work that set a solid base to get the Lily Project’s art seen in the community. The idea to use a lily flower came from one of the first meetings. One of the artists, Mia Lambert, had created a piece during the unrest in Minneapolis—a hand holding a lily flower. The artists’ understanding of lilies as a representation of growth and rebirth, in their case meaning the chance to grow and make a change in our community, were connected to the piece she created. The whole group thought that it connected well to their goal and message and that it could turn into a bigger part of what they were trying to do.

So far the project has created two main murals, the Republic Project and the Greenway Project. The Republic Project is named after and located at Republic, a restaurant in the Seven Corners district on the West Bank of the University of Minnesota. The Greenway was a temporary installation featured for The Greenway Glow, an art festival that ran the last week in October. 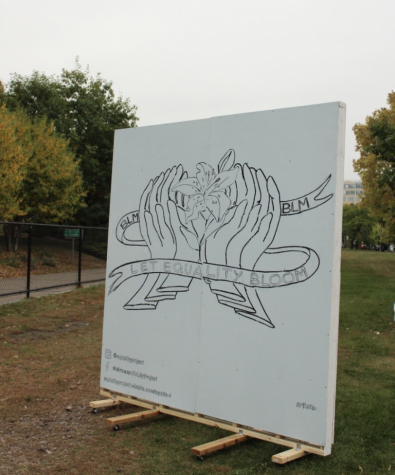 The Republic Project was designed by one of the Lily Project creators, Mia. Since the Lily Project uses the flower as a symbol of growth and rebirth, the artists of The Republic chose another symbol, the phoenix, surrounded by lily flowers to reinforce that message. The 1970s themed restaurant itself was a part of the inspiration for the mural, with the artists drawing inspiration from the connection to civil rights activists of the 60’s and 70’s. Located in a prominent location right outside of downtown Minneapolis, the mural is accessible and can be enjoyed by all who pass by.

The Greenway project was a part of the Greenway Glow festival in collaboration with other artists. A donation from the Greenway Coalition and others made it possible to buy supplies, including the temporary wall the artists built as their canvas. The group decided on a design that had been created earlier by an artist, Jordan Dotson. Using Jordan’s original design, artist Maddie Tatum reimagined the design as a large-scale mural. The mural has two sides: one features three hands holding up a lily flower, and on the other side, the Minneapolis Lily Project logo and statements about what their group stands for. When I talked to Maddie about her experience with the Greenway Glow she said: “Art makes you feel things differently than just watching or reading news, and art has a way of connecting with people; that is the overall goal with all the murals. It is exciting to do something [like the festival] where we could just talk to people that were walking by or biking by [about our art]. We stayed out from about 2 p.m. to 8 p.m. and it was a very cool experience.”

Everything the Lily Project has painted has come from individual work that was turned into collaborative murals. The group has about 20 people, each with their own strengths and ideas. The artists I spoke with wanted to spark more conversation about racial justice issues, and to add younger artists to the project. “People are looking for something positive to get into activism and have these conversations with their families, and I think art is a really good medium to do that,” says Cicely Bass. The project is always looking for more help, not only from artists but from anyone who can help organize and help the project grow. 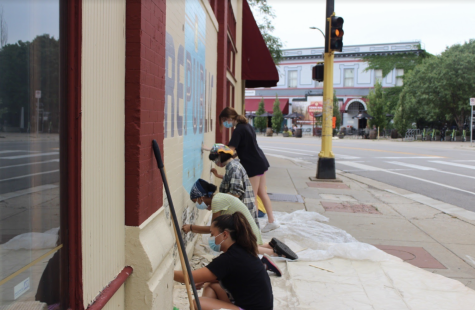 This winter will be a time to create exciting plans for next summer and spring. The Greenway Project will be featured in an exhibit coming in the summer of 2021, organized by the Compassion museum. Another goal is to paint a mural in collaboration with the art programs at Southwest High School and eventually South and Washburn. The Lily Project is committed to using art as a language for justice, with student artists of color leading the way. Watch for their signature lily popping up around the city as they share their talent for creation and expression.